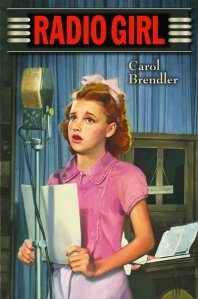 It’s here! Now there’s a discussion guide for Radio Girl for mother/daughter book groups, complete with an online old-time radio listening guide and a recipe for an authentic egg cream, Cecelia’s favorite thirst quencher! Click image below to see it full size and to download. If you use it, let me know how you like it.

For educators, there is also a nifty classroom guide prepared by publisher Holiday House to download for free!

The Eleven City Diner at Wabash and 13th, Chicago

It’s a Brooklyn original, the egg cream. A soda fountain drink made with milk, seltzer water, and chocolate syrup, ideally with Fox’s U-Bet chocolate syrup. Cecelia, the main character in Radio Girl, loves them. Here in Chicagoland, an egg cream is hard to find. Chicago has its own legendary drinks and dishes, but the closest thing you can get to an egg cream is a drink called a chocolate phosphate. Yummy, but not the same. It’s made without milk. So what’s a girl to do when she wants the real deal? According to my research, there are at least three places in my area that make egg creams and I am determined to try them all. This post is the first in a series in which I document my Midwest egg cream quest.

The Eleven. There was a line to get in on Sunday afternoon.

Vernors! They also had Faygo Rock’n’Rye and Green Rivers

Last weekend I stopped at the Eleven Diner on Wabash in Chicago. This place is cool! Not only do they serve egg creams but they also have real kosher deli-style food AND two hard-to-find soda pop brands that I love: Vernors ginger ale and Faygo Rock ‘n’ Rye  If you grew up in Michigan, you know what I’m talking about. There’s a candy counter and paintings of somber rabbis line the walls.

The Upstairs Decor Was Magical!

So I ordered a corned beef on rye and what is purported to be a genuine Brooklyn-style egg cream. I don’t know for sure that it was made with Fox’s U-Bet chocolate syrup, but it was delicious! Heck, everything was delicious.

This place is going to be hard to beat. How about you? Ever had an egg cream? Ever been to the Eleven? Wanna go?