Q. When the first radio was invented, was there anything out there to listen to?

The first radio broadcast was just a guy playing a violin, singing and reading and it happened in 1906 in Massachusetts. I guess it’s considered a broadcast because it was a one-way communication (unlike the wireless telephone, which was two-way), but was anybody listening? Who had a receiver back then? Hardly anybody. (Some ships did, and they say some sailors caught the broadcast that evening. Woo.)

But real radio broadcasting, with stations and licenses and call letters and audiences listening at home–that didn’t really get going until after the Great War. Here’s more.

Radios became, like, the biggest thing since the invention of the bicycle back in the early 1920s when people finally started to take notice of this incredible new technology. 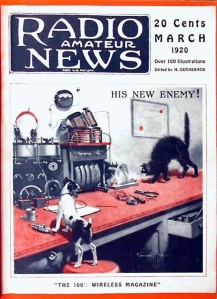 Try and imagine how weird it must have been to hear a voice or live music coming into your parlor from somewhere far away–without wires! I mean, it must have seemed pretty freaky.

The first radios that actually were popular with the public (with the early adopters, in today’s parlance) were crystal sets.

Fashionable 1920s ladies pose as if listening to a fine Edison console.

Often homemade, crystal sets didn’t look much like radios as we think of them. There weren’t any speakers so you had to use earphones or these unwieldy horns to hear anything. After a while, someone figured out how to amplify the soundwaves and radios no longer needed earphones or horns which meant that the whole family could listen together from anywhere in the room.

Soon, manufacturers came to realize that people wanted their prized radio sets to be beautiful enough to display in their parlors, like a piece of furniture. That’s when radios got pretty.

This is very much like the one my grandma had in her sitting room. My dad thinks theirs was a Stewart-Warner brand. We kids weren’t allowed to touch it. It sat on the floor (a console radio, like the Maloneys’) and it was maybe four feet tall. I wish we still had it.

Here’s a handsome tabletop “cathedral” model, an Atwater-Kent from about 1931:

This is a “tombstone” style, a Zenith tabletop from 1935:

An Emerson 153, with a super high-end bent veneer face:

The cases weren’t always made of wood; here’s an early Catalin (similar material to Bakelite) model: 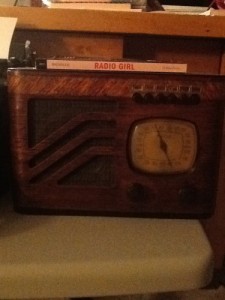